Shree Ganesh
The thousands of mangoes are then distributed to devotees who visit the temple the next day. Last year, fourteen hundred mangoes from the Amba Mahotsav were distributed to patients at the Sassoon hospital.

Every year on the occasion of Akshaya Tritiya, an offering of mangoes is placed before Shri Ganapati. Mango is the much loved fruit in India. The kind grown in the district of Ratnagiri is considered the most superior in taste and quality and has demand all over the world. In fact the Alphonso mango is known as the king of fruits.

This rich and golden red fruit gets the honour to be offered at the Lord’s feet on Akshaya Tritiya. Desai Bandhu, the leading merchants of Alphonso mangos in Pune offer a whopping 11000 mango fruits as ‘naivedya’ to Shri Ganapati. 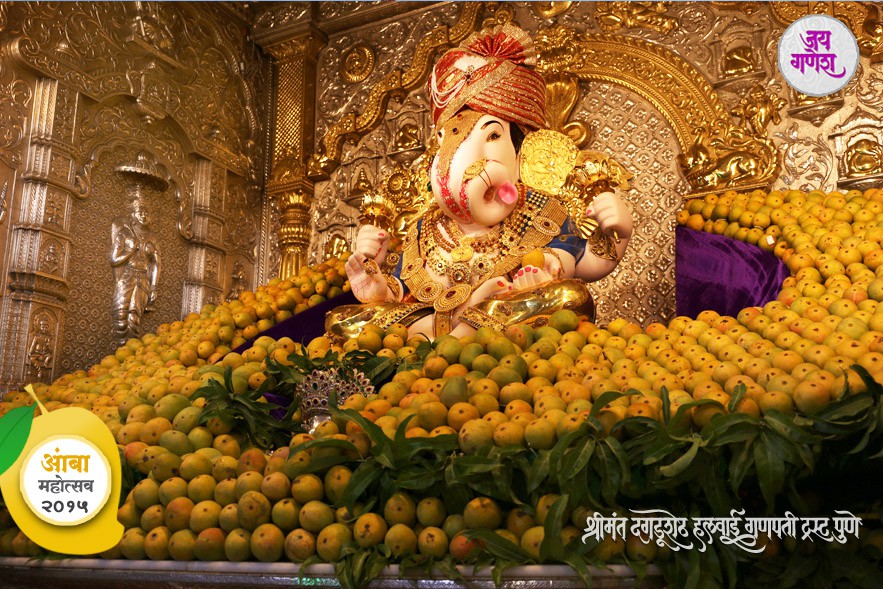 The temple premises are decked with heaps and rows of ripe golden mangoes whose mild sweet scent fills up every corner. Visitors and media persons come in large numbers to experience this wonderful sight and to capture it in their cameras.

In an invocation of sorts, Shri. Mandar and Mrs. Maitreyi Desai, owners of Desai Bandhu Ambewale, did Abhishek and Ganesh Yaag to pray for the lifting of the import ban on Alphonso mangoes in Europe. It was an added honour to have Shri. Shrinivas Patil, Governor of Sikkim on this occasion.

He modestly mentioned he had been instrumental in a small way in the construction of the temple. With deep gratitude in our hearts we were immensely happy to felicitate him. It is a custom at the temple to worship Shri Gagnapati by applying ‘Vasantik Utee’ ( fragrant paste of sandalwood) to the deity.
Festival Details Music Festival is organized on the day of the Mangalmurti Ganpati temple anniversary. The music festival was started in the year 1984.
Festival Details